Ziki (喰) is a character that has yet to appear in anything. She is the Mouth Witch.

As her title entails, she has many sharp-toothed mouths. Ziki has orange hair braided into four plaits, all with mouths at their end. She also wears a white apron on a red dress with multiple tongued mouths on it, as well as a red witch hat rimmed with teeth and a large mouth in the middle. She has mouths on her hands and wears yellow striped stockings with gray boots. Her eyes appear to be solid white. 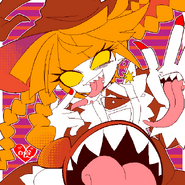 meal
Add a photo to this gallery

There are no known quotes from Ziki.

Retrieved from "https://okegom.fandom.com/wiki/Ziki?oldid=57170"
Community content is available under CC-BY-SA unless otherwise noted.