Yohira (四葩) is a character that has yet to formally appear in anything. She is a frog witch.

Yohira has turquoise eyes, pointed ears, and an overall green color scheme. She has pale, string-like purple hair with two low pigtails and a bang covering her left eye. Her hat is green with a turquoise underside with a frog hat band. For topwear, she wears a cropped green sweater with a hoodie and light green lace. Underneath appears to be a white turtleneck shirt. As a bottom, she wears a green pleated skirt with a brown belt and a white petticoat beneath She also wears green rain boots with blue soles.

She has yet to be shown interacting with someone.

Yohira's silhouette in Wadanohara and the Great Blue Sea.
Add a photo to this gallery 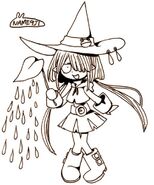 S1ug
Add a photo to this gallery

There are no known quotes from Yohira.

Retrieved from "https://okegom.fandom.com/wiki/Yohira?oldid=59041"
Community content is available under CC-BY-SA unless otherwise noted.