Victor Flankenstein (ヴィクター・フランケンシュタイン) is a now-deceased character that made his first appearance in Seaside Dispatches 2. He was a mad scientist who created Crea Flankenstein and was close with Satanick.

Victor has messy black hair with white streaks in a ponytail. He wears a monocle on his right eye, a lab coat over a gray dress shirt and black pants. Also, he wears dark grey gloves and black dress shoes.

Victor was a man that was passionate about his work. He had a rather calm personality, and held to himself. The latter seems to have been caused by the loss of his family.

Victor lived in a Human realm, together with his wife and two daughters. Tragically, they died in an accident, leaving Victor alone and depressed. He decided to create a new girl, using the bodies of his two deceased daughters. This is how Crea Flankenstein came to be.

While he was working on creating Crea, Satanick took a liking to him. He proposed to Victor, and invited him to the Pitch Black World and promising to grant him immortality. Victor refused on the grounds of not wanting to be immortal. Not too long after, he passed away.

Crea is Victor's creation. He created her using the bodies of his two deceased daughters.

Satanick is Victor's close friend. Satanick was in love with him and proposed to him. These feelings were, however, unrequited by Victor. 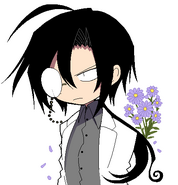 Retrieved from "https://okegom.fandom.com/wiki/Victor_Flankenstein?oldid=55833"
Community content is available under CC-BY-SA unless otherwise noted.