Ver Million (ベル・ミリオン) is a character from Wadanohara and the Great Blue Sea. She is a demon mercenary hired by the Totsusa Kingdom and a friend of Wadanohara.

Ver Million is depicted as a very tomboyish girl. She has red eyes, dark brown hair, red striped horns, as well as a red tail and wings. Her top is dark gray and double-breasted with eight dark brown buttons, with a lighter gray sailor collar and cuffs; her puffy shorts are the same colors. She also wears red tights with stripes and dark red and black boots. She also has what appears to be a machete sheathed in a tan sheath on her left hip, she also has a long claw weapon with three blades on her left hand. She is depicted in-game with over-the-knee socks and knee-high dark brown boots that has darker brown straps and red buttons.

Ver Million has a very tomboyish personality, having a hatred for anything girly. She cares for her friends, especially Wadanohara, but seems to value her mission over everything else. She has a hobby of working, as she loves money.

Ver Millon used to live in Flower World as Rosaliya Phantomrose's subordinate. The reason she left her world is unknown.

Laurentia is Ver's fellow mercenary hired by the Totsusa Kingdom.

Wadanohara is one of Ver's friends. While she is shown to care about Wadanohara—regretting taking the job for Totsusa kingdom, worrying for her friend's safety during the Sea of Death's invasion, and claiming she'd never have taken the job offer had she known Wadanohara would've been there—she has stated she values her job duties over everything else and refused to quit the job or make an exception for Wadanohara.

The Merc Trio at Maekami's bar.
Add a photo to this gallery 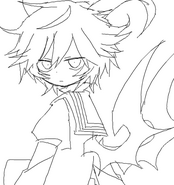 Retrieved from "https://okegom.fandom.com/wiki/Ver_Million?oldid=51886"
Community content is available under CC-BY-SA unless otherwise noted.