Ushio (牛尾) is a character that has yet to appear in anything. He is a bull demon from Reficul's world.

Ushio has what appears to be a bull-like hat on his head. His 'hat' has red eyes, a nose piercing, a tag with the number 666 on it's right ear. Ushio himself, has black eyes but has one red eye on the left, he has raceless white skin; long, black hair in a messy style, he also has a bull tail and horns. He wears a greyish brown coat which fur rimmed on the end of sleeves and hood. He wears a black tie, a gray dress shirt, and a sweater vest under the coat. He has blue jeans and dark brown boots. He also wears black gloves.

As described by Deep Sea Prisoner, he is “a hot-headed, rash idiot”.

Boss and the Devil of his world.

Enemy, Ushio hates Lowrie and is probably the reason why Lowrie doesn’t like cows. 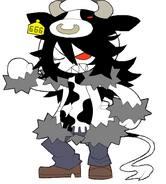 Retrieved from "https://okegom.fandom.com/wiki/Ushio?oldid=50839"
Community content is available under CC-BY-SA unless otherwise noted.