Uneri (ウネリ) is a character that has yet to formally appear in any series. She is a gorgon.

Up to this day, Uneri has only appeared in some of Deep-Sea Prisoner's Illustrations.

Not much is known about her relationships. 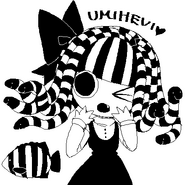 Retrieved from "https://okegom.fandom.com/wiki/Uneri?oldid=50836"
Community content is available under CC-BY-SA unless otherwise noted.