Tsukimitsu (月光) is one of the characters that has yet to appear in any series. He is a humanoid rhinoceros beetle and Hinomaru's brother.

Tsukimitsu has royal blue eyes and wears rimless glasses. His black hair is parted to the left side, where his hair is covering his left eye. His beetle horns are also black. He wears a gakuran which consists of a black coat with mandarin collar, five golden/yellow buttons worn over a white shirt and black trousers with dress shoes.

He seems to have a serious personality, not much else is known about him.

Up to this day, Tsukimitsu has only appeared in some of Deep-Sea Prisoner's Illustrations. 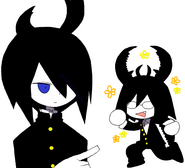 Retrieved from "https://okegom.fandom.com/wiki/Tsukimitsu?oldid=50827"
Community content is available under CC-BY-SA unless otherwise noted.