Totsusa Soldiers (兎津叉帝国の兵士) are bunnies serving under the Totsusa Kingdom in Wadanohara and the Great Blue Sea. They all appear as white bunnies that can only speak bunny language, which sounds like they constantly say only the word "bun;" however, some characters like Dolpi can translate it despite its simplistic phonetics.

Totsusa Soldiers are, for the most part, white bunnies with gray eyes, wielding blood-red spears.

In part of the Blue Sea, Coral Sea, the player can encounter rare golden soldiers, and giant Totsusa soldiers with red eyes.

The Totsusa Soldiers are violent and insane; despite their fluffy and harmless appearance, they can easily gore people and kill them.

A swarm of Totsusa Soldiers 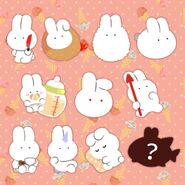 Retrieved from "https://okegom.fandom.com/wiki/Totsusa_Soldier?oldid=67516"
Community content is available under CC-BY-SA unless otherwise noted.