Torimaru (鶏丸) is one of the characters that has yet to officially appear in any series. She is a humanoid chicken.

Torimaru has short, white hair with one small yellow streak and four red feathers one her head. She wears a short cape with a red ribbon tied around her neck over a white dress/shirt. Instead of arms and humanoid legs, she has wings and chicken legs. Also her lower eye lid is red, and she has black eyes.

Up to this day, Torimaru has only appeared in some of Deep-Sea Prisoner's Illustrations. 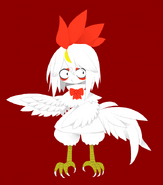 Birds
Add a photo to this gallery

Retrieved from "https://okegom.fandom.com/wiki/Torimaru?oldid=50821"
Community content is available under CC-BY-SA unless otherwise noted.