Tomoshibi (トモシビ) is a humanoid anglerfish and a supporting character in Wadanohara and the Great Blue Sea. She is part of Minero's friend group.

Tomoshibi has short, choppy bangs with strands of hair flicking out from the side of her head. Her hair is dark brown, long, and braided into a single strand. Her eyes are always closed, and she has noticeably long eyelashes. A small, yellow photophore dangles from the top of her head.

She wears a brown skirt that stops just above her ankles with a white petticoat and brown suspenders that have a lighter brown stripe in the middle, along with a lighter brown dress shirt with white cuffs and brown shoes. The cuffs of her shirt, as well as her suspenders, are decorated with brown buttons, and two more buttons are shown on her hair tie. Tomoshibi also wears a brown scarf, worn in a way that both ends hang over her back.

Tomoshibi is extremely quiet, barely saying anything during the course of the game aside from the occasional yawn, snore, or "...zzzzz." According to her character profile, she loves to sleep, and it's also listed as her hobby.

She seems to share Rimorimo and Creamil's opinions on Minero's antics, agreeing that it's her fault they never find any treasure. She is said to become angry when awoken, so everyone stays quiet in her presence.

Tomoshibi is a minor character in Wadanohara and the Great Blue Sea, and she appears with Minero, Creamil, and Rimorimo.

Minero is Tomoshibi's friend and the leader of her friend group.

Tomoshibi's dialogue portrait in Wadanohara and the Great Blue Sea.
Add a photo to this gallery 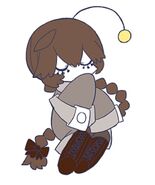 Retrieved from "https://okegom.fandom.com/wiki/Tomoshibi?oldid=68320"
Community content is available under CC-BY-SA unless otherwise noted.