I'm home...
This page contains heavy spoilers about
The Gray Garden.
If you wish not to be spoiled, do not read this section unless you've completed the game.
Perhaps, read something else instead!

The Gray Garden (灰色庭園) is Deep-Sea Prisoner's second game, containing less graphic content than their other works. Blood, violence, and body horror are featured, however the gore is rather minimal and is not presented in a startling fashion (unlike Mogeko Castle). Similar to Wadanohara and the Great Blue Sea, The Gray Garden contains turn-based RPG combat, much of which result in a series of bad or normal endings upon failure. On April 1st, 2014, an official parody game by the name of Garden Gray The was released. The short depicts a select few of The Gray Garden cast with opposite genders.

The Gray Garden introduces the young demon girl Yosafire collecting flowers in an unnamed garden. The beginning focuses on her everyday life in the Gray World, an anomaly realm where demons and angels live together in harmony. That is until one day, Yosafire is attacked by a flaming bat in the flower garden at night. With the bat having no relevance or connection to the world that they live in, the guardians of the world—Etihw, the god of the Gray Garden; and Kcalb, the devil of the Gray Garden—grow weary and suspicious.

Upon the disappearance of many individuals, one of which being the devil's brother and head angel, Wodahs, the archangel Grora takes charge of an investigation to further examine the phenomenons. Yosafire's angel friend (whom she also claims to be "sworn in love" with), Froze, is selected to begin the investigation. With Yosafire tagging along, albeit intrusively, their adventure begins to solve the mystery and eventually save their home from the invaders. Various friends join the two in their party: Rawberry, a demon who loves to eat; Macarona, a timid angel with a hidden strength; Dialo, a demon who is known for her apple pies; and Chelan, a mute angel who lives with Dialo.

Through details and dialogue, Yosafire realizes that the history of the Gray Garden was not as light-hearted as it is in their present. The events during their battles are left unspecified, but shards of their past remain in textbooks and flashbacks. Before the Gray Garden came into existence, there had been a war for centuries between Kcalb and Etihw. Many of their underlings, both demons and angels, had died in the war. With a long history of brutality, the god and the devil ended the war with only two subordinates left each.

To their dismay, they soon realize that an unknown plane is drawing near to terrorize the angels and demons of the Gray World and ultimately threaten their peace. Ivlis, the Devil of the Flame World, has invaded the Gray Garden to viciously take Kcalb's power for his own schemes. The girls are pursued and knocked out by Rieta, a loyal warrior of the Flame World. The unconscious party is kidnapped and imprisoned in a dungeon, guarded by the Flame devil's menacing daughter Poemi and cowardly follower Emalf. With the help of a "Passing Demon" and Kcalb's cat minions, Ater and Arbus (who have been hiding in the shadows all along), Yosafire, Froze, Macarona, and Rawberry make it back to the endangered Gray Garden.

There are two different resolutions that can follow, based on the player's success in the final battle. The normal ending depicts a mournful Etihw, who was unable to prevent the deaths of the denizens within the Gray Garden. They suffer from returning traumatic flashbacks over events of the Great War. The fate of the god is left unknown, but not without the haunting monologue of a [1][2]mysterious character.

When the player succeeds in the final battle, the true ending ensues. The Gray Garden has been saved, with little injuries to the angels and demons, and harmony among the people continues. 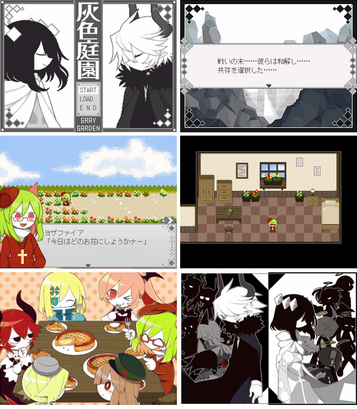 Start a Discussion Discussions about The Gray Garden