Tetsuzora (鉄空) is one of the characters that has yet to officially appear in any series. She is the witch of robotics and the like.

Tetsuzora has medium length purple hair that curls outward at the ends. Her witch hat is gray and tied with a black ribbon topped with goggles. The left lens of the goggles is damaged. There are many gears and screws coming out of the hat. She wears a black dress and a metallic gray skirt over it, as well as a gray high collar along with metal-like arm bands and black fingerless gloves, exposing her red-nailed fingers. She also wears gray leggings and black boots rimmed with gray. Her right eye is a deep purple, whilst the other is scarred.

Her staff/broom is solid, black, and purple striped with a key-chain like item dangling at the wide end.

Tetsuzora turned Artamos into a robot. They are probably on bad terms; the events due to which Tetsuzora took such actions against Artamos is currently unknown.

She seems to know her.

Merol is Tetsuzora's familiar. She is also a friend to her.

Tetsuzora's cameo in Wadanohara and the Great Blue Sea.
Add a photo to this gallery 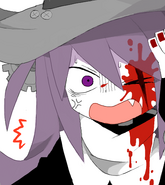 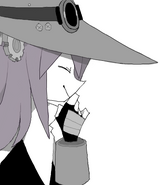 There are currently no known quotes by Tetsuzora.

Retrieved from "https://okegom.fandom.com/wiki/Tetsuzora?oldid=59033"
Community content is available under CC-BY-SA unless otherwise noted.