Tatsumiya (竜宮) is a humanoid oarfish from Wadanohara and the Great Blue Sea. She is one of the employees of Uomihime's court, and serves as a foster mother to Wadanohara after the Great Sorcerer's disappearance. She was one of Meikai's familiars.

Her white hair is cut into a short himecut, with red accents visible in the middle of her bangs and at the sides of her face. Two long, red antennae extend from the top of her head. Her eyes are yellow-orange with black pupils. She also has red nails.

Tatsumiya wears a white furisode accented with grey markings and red trim, the end of the long sleeves has red decoration on the tips, and tied with a red obi. Her obijime is yellow and decorated with a white fish. She also wears a pink obi-age.

In her past appearance her hair in front was the same, but in the back it was much longer. She wore a dark red kimono with lighter red, gradient sleeves, the neck piece was a duller red and she wore an obi, that was the exact same as her current one, except the fish on it had its eye open. In the manga, however, her furisode is instead decorated with a variety of flowers.

She is kind and caring, possessing a motherly personality. She takes care of Wadanohara in place of Meikai, and cares for Wadanohara as if she were her daughter. She worries over Wadanohara, being one of the few to recognize the witch's flaws and problems.

She is very loyal to Meikai, often referring to him as Lord Meikai. Even after his death, she continued to serve him by caring for his daughter. Hidden from others, she still misses her master, wondering what truly happened to him after he sacrificed himself to seal the Sea of Death away.

She was Meikai's familiar and the one Meikai had chosen to wield the Sacred Sword, she remained as his familiar up until his supposed death. In the past, she had longer hair and wore a red kimono instead of a white one.

Moments prior to his death, Meikai entrusted the care of his daughter Wadanohara to her. Respecting her master's wishes, Tatsumiya filled the role of parent for Wadanohara, in place of her absent father and mother. It was she who taught Wadanohara all of the magic she knows, Tatsumiya passing down to Wadanohara the magic her father used.

Meikai was Tatsumiya's former master, who entrusted her to take care of his daughter, Wadanohara, moments before his death. Tatsumiya greatly respects and cares deeply for her former master, continuing to refer to herself as his familiar even after his death. She also continues to grieve for Meikai, centuries after his death, as she often expresses sorrow when alone over his passing.

Old was Tatsumiya's former fellow familiar. In the past, an altercation between her and Old ended with Old possessing noticeable scars that were made through the usage of the Sacred Sword. Old seeks revenge on her for disfiguring his face and for having been the chosen one instead of him.

Idate is Tatsumiya's acquaintance. He saved her from Old. It is implied that Tatsumiya has a crush on him.

Tatsumiya's dialogue portrait in Wadanohara and the Great Blue Sea.

Tatsumiya's dialogue portrait from the past in Wadanohara and the Great Blue Sea.

The employees of the Court

◆Tatsumiya: Ms. office-lady-Miya. Old’s coworker since their early days.
Add a photo to this gallery 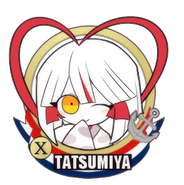 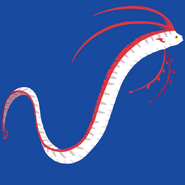 Tatsumiya in Oar Fish form
Add a photo to this gallery

Retrieved from "https://okegom.fandom.com/wiki/Tatsumiya?oldid=55963"
Community content is available under CC-BY-SA unless otherwise noted.