Takama (タカマ) is a character that has yet to formally appear in any series. He is an orca and Idate's brother. He is also Nagi's father.

Like the rest of the orcas, Takama has a tail, a dorsal fin and two white spots on his hair. Though, his dorsal fin is slightly longer and ragged looking compared to Idate's. The left white spot on his head has a white line over it, and while his tail has no caudal fin, it is merely the weird angle of his tail. He also has a face scar over his left eye.

His eyes are black, and he has a messy darkish-like gray long hair which was tied into a ponytail. Takama wears traditional Japanese clothing, which consists of a gray kimono, a black haori (jacket), black obi, black half gloves, and a pair of black zori (footwear) accompanied with a pair of white tabi (socks).

When he was younger, he wore a black business suit along with a black vest and a striped gray collared shirt. The hairstyle is still the same with a shorter ponytail and the white spot with a white line even though he didn't had a scar on his eye that time, and his dorsal fin wasn't ragged. His tail also already has no caudal fin.

While seeming strict in concerns to his brother, Takama appears to be much more warmhearted with his wife and daughter and has shown to be neutral in the presence of his younger brother, Idate.

Not much is known about him, other than him being the elder brother to Idate and Nagi's father.

Up to this day, Takama has only appeared in some of Deep-Sea Prisoner's Illustrations.

Idate is Takama's younger brother. He disapproves of him but they have been shown interacting twice in neutral terms.

Nagi is Takama's daughter, he has shown to disapprove Idate around her while she dislikes this.

After the 2017-04-22 update titled 'おるかふぁみりー' (Orca Family), the unnamed orca is most likely Takama's wife and the mother to Nagi, their daughter. 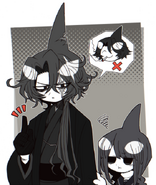 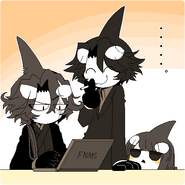 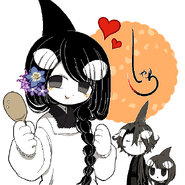 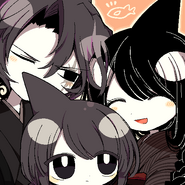 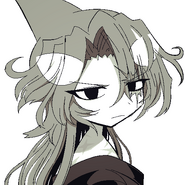 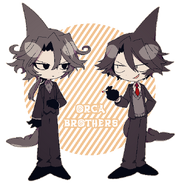 Retrieved from "https://okegom.fandom.com/wiki/Takama?oldid=53153"
Community content is available under CC-BY-SA unless otherwise noted.