Taffy (タフィー) is a character that has yet to formally appear in any series. He is Fumus' head angel and a seraph.

Taffy has bright red eyes, long blonde hair in a ponytail and an ahoge. He wears a brown cardigan over a gray turtleneck sweater. In addition to that, he also has black pants and black shoes. He also sports out a green jacket that he hangs on his shoulders. Taffy also has three pairs of wings and carries a Javanese Kris.

Before his redesign, he wore a green jacket and green scarf(?) underneath his jacket. He wore brown gloves, dark brown pants, and black dress shoes. His wings were smaller and he had an uneasy expression.

Taffy is said to mercilessly kill demons. Although he shows no mercy to them, he is shown being very kind to Olive. He seems to dislike black coffee, opposed to Fumus, who constantly drinks it. He is fearful of Fumus' cruel treatment of him, sweating and shivering at the very thought of it. He has been described to have a mind of steel, and if he was sexually mistreated then he wouldn't break down.

In the past he has decapitated Anten and has assaulted Roc Hijohshiki, landing him on bad terms with the two.

Up to this day, Taffy has only appeared in some of Deep-Sea Prisoner's Illustrations.

Anten and Taffy are seemingly on bad terms. Taffy once sliced his head off and held it on a plate.

The two have been said to be on bad terms, Roc Hijohshiki particularly wants to lynch Taffy for the reason of assaulting him in the past. Apparently Hidou has good quality footage of this instance.

Fumus is Taffy's boss. Fumus is also Taffy's sadistic god who tortures him in various ways, like cutting off his feathers, denailing him, making him drink hot sauce, or threatening to hurt Olive. One picture depicts Taffy injured and sobbing with Fumus looking angry the background, hinting that he might have beaten Taffy.

Tsurugigozen is Taffy's friend and colleague.

Olive is Taffy's subordinate and significant other. He seems to treat her kindly.

◆Taffy: Everyone’s sandbag. He’s the type to let you ＊＊＊＊ him if you beg. If you don’t wanna beg, you could also just punch him, and he’d let you. “Uuu…. Please go easy on me…. It hurts… Auuuhh…”
Add a photo to this gallery 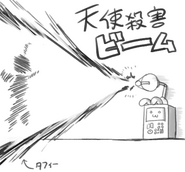 Taffy: Even if he's tortured/violated in a disturbing way, he will maintain a will of steel and withstand it. 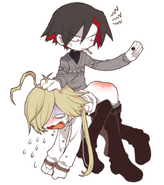 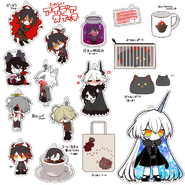 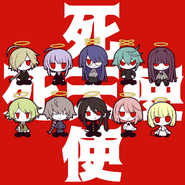 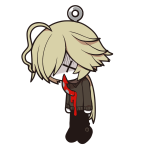 There are currently no known quotes by Taffy.

Retrieved from "https://okegom.fandom.com/wiki/Taffy?oldid=55947"
Community content is available under CC-BY-SA unless otherwise noted.