Suzkilli (スズキリ) is one of the characters that has yet to officially appear in any series. He is a shinigami.

Suzkilli has shoulder length black hair and long bangs swept to one side, as well as gray eyes and white skin. He wears the bleached skull of a sharp toothed horned animal, and also wears black clothes, with black pants, black shoes, and black gloves. Over this he wears a dark gray cloak with a rectangular patterned rim and a dull green inside. Two bells, one on the animal the other at his neck, are to their spots by chains, and he appears to have a tail resembling an ox tail. Suzkilli is often depicted with two black scythes with geometric at terns jutting out.

Up to this day, Suzkilli has only appeared in some of Deep-Sea Prisoner's Illustrations.

It is unknown what relationship do they have. They were seen in an artwork together. 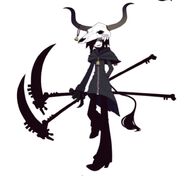 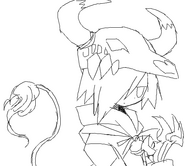 Retrieved from "https://okegom.fandom.com/wiki/Suzkilli?oldid=50807"
Community content is available under CC-BY-SA unless otherwise noted.