Not to be confused with Suno, a ladybug character.

Sunosan (須野さん) is a sentient snowman who lives on a snowbank. He is a supporting character in Ice Scream.

Sunosan is a typical white snowman, with a head and an abdomen. He wears a sky blue hat, and also sports a blue scarf on his "neck". He has two sticks for arms, with three branches acting as fingers, two pieces of coal for eyes, a carrot for a nose, and a piece of thick string for a mouth.

Though his character description states that he is a "nice guy," Sunosan, in reality, is ill-natured, passive-aggressive, and jumps at any chance to torment. He is described as pure scum and spouting malicious words if he is not being passive-aggressive. His most prominent victim is Shirogane.

Not much is currently known about his background.

Suno is antagonistic toward Shirogane, and loves whatever misfortune happens to the wolf. He frequently verbally abuses Shirogane and has a hobby of yanking his tail merely to elicit a shriek of pain out of the wolf, saying it is fun to do so. Suno will not acknowledge him "until [Shirogane] is gutsy enough to take on an orca," but knows how slim the chances to it are.

Yukisada is Suno's neighbor. Suno has admitted his opinion on Yukisada being too lax on Shirogane, but personally does not bear any ill will toward the snowy owl. 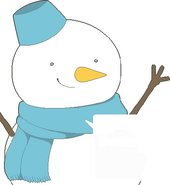 Sunosan talking about Shirogane in Ice Watching Round 1.

Sunosan grilling food with a bunbun in Ice Watching Round 2.

Sunosan with Yukisada in Ice Watching Round 3.

A beastly snowman that will jump at any chance to torment. He is indescribably cruel in his passive aggressive ways. His hobby is his persistent verbal harassment of Shirogane. If you give him a flying kick, he will immediately disintegrate.

Retrieved from "https://okegom.fandom.com/wiki/Sunosan?oldid=60895"
Community content is available under CC-BY-SA unless otherwise noted.