Not to be confused with Sunosan, a snowman character from Ice Scream.

Suno (スーノ) is a character that has yet to appear in anything. She is a ladybug girl.

Suno has brown hair that is red underneath, a red beret with a four leaf clover, and red eyes with black pupils. She also wears a red sweater with a badge on her chest, over a white shirt. She has black gloves on each of her four arms. Underneath, she wears a dark red skirt, tan leggings, and brown boots with red buttons on the side.

Up to this day, Suno has only appeared in some of Deep-Sea Prisioner's ilustrations.

Suno and Libra were seen together in an illustration; the type of their relationship is unknown. 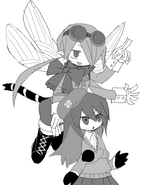 Retrieved from "https://okegom.fandom.com/wiki/Suno?oldid=44030"
Community content is available under CC-BY-SA unless otherwise noted.