Suimin (スイミン) is one of the demons in Satanick's world. She is a young ram demon child and Eimin's younger sister.

Suimin looks rather similar to her relatives, except for being much shorter. She has a hair cut resembling a parted Hime cut tied into a low ponytail with a black ribbon and with a curved ahoge on her head. Her hair is white with brown edges and has curved gray ram horns over her sheep ears. Her eyes have black sclera and red irises She wears brown overalls over a brown buttoned white dress shirt. Her bottom half is composed of ram legs and hooves.

Suimin appears to be very mischievous.

Up to this day, Suimin has only appeared in some of Deep-Sea Prisoner's Illustrations.

Suimin and Eimin are related to Envi, but exactly how is unknown. [2]

Yagi was shown together in artwork with Suimin. The precise dynamics of their relationship are still unknown. Eimin is Yagi's relative [1], thus, Suimin is related to Yagi as well. How they are related is unknown, but it can be concluded that it is the same as how Yagi is related to Eimin, because Eimin is Suimin's older brother.

Jork is related to Suimin through Yagi. How they are related is unknown. 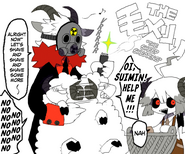 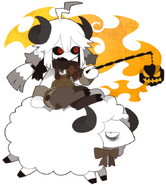 Retrieved from "https://okegom.fandom.com/wiki/Suimin?oldid=60223"
Community content is available under CC-BY-SA unless otherwise noted.