Sugary (シュガリィ) is a character that has yet to appear in anything. She is seen with Brown, Decay, and Mint.

Sugary has long red hair with pink stripes throughout it and wears black hair clips. At the top of her head, her hair is seen conforming to a horn-like shape and she has a long tail which looks as if it's made of the same hair. She has yellow eyes. Sugary wears a white button up shirt with a black ribbon and red argyle pattern sleeveless sweater over it. She has a dark red skirt and darker red leggings underneath. She wears loose brown boots.

Up to this day, Sugary has only appeared in some of Deep-Sea Prisoner's Illustrations.

Brown seems to know her.

Decay seems to know her.

Mint seems to know her. 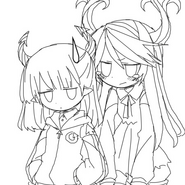 Retrieved from "https://okegom.fandom.com/wiki/Sugary?oldid=50803"
Community content is available under CC-BY-SA unless otherwise noted.