Starlit Night (スターリット・ナイト) is a character that has yet to formally appear in anything. She is a witch of the night sky.

Starlit Night has white skin and closed eyes. She has blonde hair with blunt, straight-across bangs, tied into pigtails with ties decorated with yellow stars. She wears a scalloped edged-lavender dress with a white collar, and long sleeves. She appears to have a white turtleneck collar and petticoat with a dark purple bow. Her witch hat has a star-shaped brim, with a purple ribbon tied around it, also adorned with star decorations. She wears dark purple tights and purple boots with small, dark purple bows. Going with her star motif, she has yellow stars on her hat, pigtails, bow, and boots.

They possibly know each other. 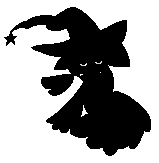 Starlit Night's silhouette in Wadanohara and the Great Blue Sea.

Starlit Night's cameo in Wadanohara and the Great Blue Sea.
Add a photo to this gallery

There are no known quotes from Starlit Night.

Retrieved from "https://okegom.fandom.com/wiki/Starlit_Night?oldid=59046"
Community content is available under CC-BY-SA unless otherwise noted.