Sonia (ソニア) is one of the characters that has been said to be part of the same world as Laurentia. She is friends with Laetitia and Makizuno.

Sonia has human skin and short brown hair. Her eyes are red. Her horns are white and uniquely shaped; the right one turning up at the tip with the last spike close to the tip red, while the left one turning to the left direction at the tip. At the starting of her horns are two different coloured ribbons, the right one is orange while the left is red. She wears red glasses and her white tail is diamond shaped at the tip, with the spikes dark orange and a red-orange ribbon.

She wears a red-orange yukata with black sleeves and white frills with a red-orange big ribbon that appears behind her yukata/dress. It somehow looks like a maid-yukata mashed up clothing. She wears orange stocking on her right leg and red stocking on her left leg. She also wears brown sandals and red-orange nail polish.

She seems to be a cheerful and bookish girl.

Up to this day, Sonia has only appeared in some of Deep-Sea Prisoner's Illustrations.

The two are related in some way.

The two are friends.

The two are friends. 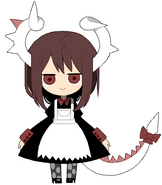 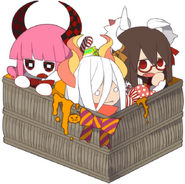 Retrieved from "https://okegom.fandom.com/wiki/Sonia?oldid=50798"
Community content is available under CC-BY-SA unless otherwise noted.