Sol (ソール) is a character that has yet to make a formal debut in Deep-Sea Prisoner's creations. She is one of Elux's angels and Reficul's younger sister.

Sol has gray curly hair that reaches waist height with a black ribbon tying up her hair at the back. Her eyes are sky blue and have white irises. She has three pairs of small angel wings and a golden halo. She wears a fitted, white formal jacket over a black Oxford shirt and a thin red necktie, along with a standard marine belt and a white pleated skirt. She also sports some (seemingly decorative) armor plates around her neck and skirt. She wears monochrome pinstripe leggings and white knee-high boots accented by two small angel wings. Like the other angels, she has a red cloth/ribbon appearing behind her.

Not much is currently known about Sol, although she seems to be possessive towards Reficul, judging from her depictions in some of Deep-Sea Prisoner's illustrations.

Not much is currently known about Sol's past.

Up to this day, Sol has only appeared in some of Deep-Sea Prisoner's illustrations.

Reficul is Sol's older sister. Their relationship is quite complicated. Prior to Reficul becoming a devil, the two both worked under Elux. This completely changed when Reficul was cast out of heaven. It has been strongly implied that Sol dealt the finishing blow by piercing Reficul through the chest with her golden sword. The two are now on bad terms, with Sol having romantic but violent one-sided feelings towards Reficul as confirmed in the 2017 10 21 Sunahama relationship charts update.

Elux is Sol's creator and boss.

They are Sol's comrades. 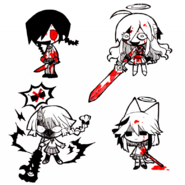 Unrequited love [2]
Add a photo to this gallery 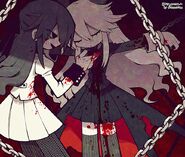 Commissioned by Piralos
Add a photo to this gallery

Loving and loathing
Add a photo to this gallery

There are currently no known quotes by Sol.

Retrieved from "https://okegom.fandom.com/wiki/Sol?oldid=84770"
Community content is available under CC-BY-SA unless otherwise noted.