Sin (シン) is a character that has yet to formally appear in any series. She is based on the serpent in the Garden of Eden from the Bible and is Reficul's wife. Mors is her and Reficul's son.

Sin has raceless white skin with long, mildly wavy, mint green hair. Her bangs are straight cut and swept to the side. A white flower with green leaves is tucked in her hair, as well as attached to her right sleeve. She has red eyes. Strung around her neck is a large golden key of unknown purpose. She wears a long white turtle neck dress with ruffles on the hem. The inside of her dress is yellow, and she wears a frilly green cape tied with a large bow of the same color over her dress. Her bottom half is that of an olive green serpent with the under side being light brown.

Not much is known about Sin's personality (as she has not appeared in any stories as of yet) other than she is kind and extremely loving. She accepts her wife's relationship with Lzet and is described to "understand perfectly that one can love multiple people." [1]

Sin's wife and lover. The two are extremely close with one another.

Her son. The two are very close. 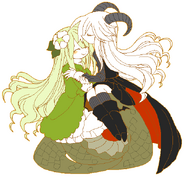 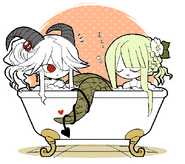 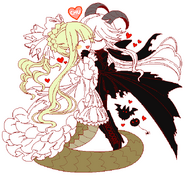 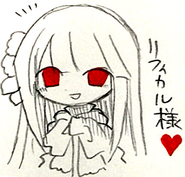 Reficul-sama ♡
Add a photo to this gallery

Commissioned by Anonymous.
Add a photo to this gallery

Retrieved from "https://okegom.fandom.com/wiki/Sin?oldid=60445"
Community content is available under CC-BY-SA unless otherwise noted.