Silhouette is a character that has yet to formally appear in any series. She's the daughter of Etihw and Kcalb. She has only appeared in a few images so far; there is virtually nothing known about her.

Silhouette has long, curly white hair that goes down to her waist, in her hair are two black diamonds on each side. She has grey eyes with black pupils and raceless white skin, like most characters. She is seen wearing a black dress with long sleeves, and a pleated bottom half with two black diamonds and a white petticoat. She wears black Mary Janes with no socks.

Up to this day, Silhouette has only appeared in some of Deep-Sea Prisoner's Illustrations.

"Skull" was drawn in an image with her. Their relationship is unknown. 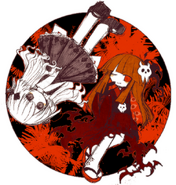 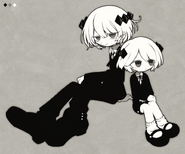 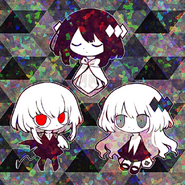 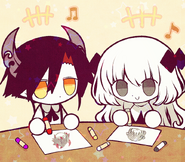 There are currently no known quotes by Silhouette.

Retrieved from "https://okegom.fandom.com/wiki/Silhouette?oldid=60322"
Community content is available under CC-BY-SA unless otherwise noted.