Sibuna (シブナ) is one of the characters that has been said to be part of the Obsolete Dream world. He is GriRea's associate.

Sibuna has an Anubis-like head with yellow eyes, pointed canine ears, three golden rings around his neck, gray hair with golden ends, and a furry tail. He wears a business suit, which consists of a white dress shirt, a black tie, black trousers, and black dress shoes.

He appears to have a cold personality.

She is his boss. 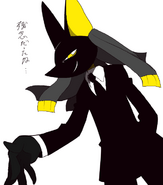 It’s such a shame…
Add a photo to this gallery

Retrieved from "https://okegom.fandom.com/wiki/Sibuna?oldid=50786"
Community content is available under CC-BY-SA unless otherwise noted.