Shortcake (ショートケーキ) is one of the characters that has yet to officially appear on any series. She is most likely from the Obsolete Dream world.

Shortcake has a shortcake slice on top of her head on which the chocolate decoration says "Shortcake". She also has light red eyes and short white hair, with a curly ahoge underneath the right side of the shortcake slice. Her dress is long sleeved with a red ribbon and four light red buttons near her chest. She also has a red cuff and a white button at the end of both of her sleeves. There is a split in the middle of her dress, and the edge is scalloped and accented with a gray line that matches the outline of the edge. Underneath her dress is what appears to be a striped pink skirt. A light red cloth that is tied can be seen above the split. She has white socks which are designed to look like red jam is falling from the top. Her shoes are black Mary Janes.

Up to this day, Shortcake has only appeared in some of Deep-Sea Prisoner's illustrations. 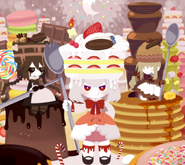 Retrieved from "https://okegom.fandom.com/wiki/Shortcake?oldid=50523"
Community content is available under CC-BY-SA unless otherwise noted.