Shiroame (白雨) is one of the characters that has yet to officially appear in any series. She is a completely white witch.

Shiroame's overall color scheme is white except her yellow eyes and gray leggings. Her hairstyle consist of straight lower bangs, upper bangs parted to the sides, and twin drills. She has a typical witch hat with a bow tied around the top. She wears a buttoned, long-sleeved dress with an apron.For footwear, she wears plain boots. Her broom is completely white as well with a small keychain(?) at the end of the hook.

Not much is know about her.

Not much is know about her.

It's possible they know each other, though, it is unknown what type of relationship the two precisely have.

Shiroame's cameo in Wadanohara and the Great Blue Sea.
Add a photo to this gallery 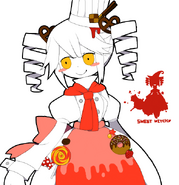 There are currently no known quotes by Shiroame.

Retrieved from "https://okegom.fandom.com/wiki/Shiroame?oldid=59670"
Community content is available under CC-BY-SA unless otherwise noted.