Shinow Utsuda (鬱田シノー) seems to be the main character in Deep-Sea Prisoner's upcoming game, The End of the Wonderland.

Shinow has white race-less skin and black deadpan eyes. Her hair is short and is a mix of dark and light orange and it is seen to be tied into a low bun, she has two light and dark orange ahoges, and her bangs are parted with a section in front of her face. Her uniform consists of an orange argyle sleeveless sweater, a long-sleeved white under shirt, a red bow tied around her neck, a light brown pleated skirt, and dark brown tights with lighter brown knee-high boots laced up with darker brown laces. her right eye is dripping with blood, albeit covered with a medical bandage.

She appears to be depressed quite often, as she is often shown crying.

It is unknown what kind of relationship does the two have.

It is possible that Arie is Shinow's friend. 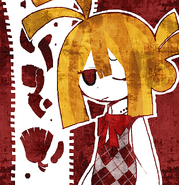 Retrieved from "https://okegom.fandom.com/wiki/Shinow_Utsuda?oldid=52891"
Community content is available under CC-BY-SA unless otherwise noted.