Shikabone (シカボネ) is a character from that appears on the sixth chapter of Obsolete Dream. He appears to be a reaper, and most likely close to Satsukugi.

Shikabone takes the form of a classic reaper with a long, flowing black hooded cloak, except that it is adorned by a gray ribbon beneath his neck. He has the head of a bleached deer skull, and the antlers protrude from the top of his head. He is often portrayed with a large, black bladed scythe also decorated with a gray ribbon. His hands appear to be skeletal.

Shikabone appeared to be somewhat timid or socially awkward as seen in chapter 6 of Obsolete Dream. It seems that Shikabone gets bullied a lot. He also is a bit of a cry baby and doesn't seem to be much threatening despite his appearance.

Hanten is Shikabone's bully. Hanten enjoys scaring Shikabone. It is not exactly known the way she bullies him though, as he ran away too fast in the manga. 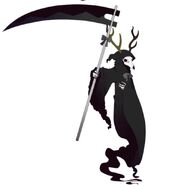 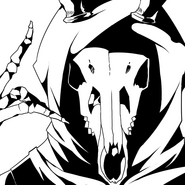 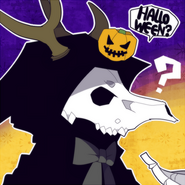 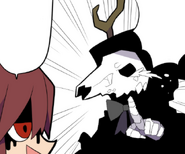 Retrieved from "https://okegom.fandom.com/wiki/Shikabone?oldid=50901"
Community content is available under CC-BY-SA unless otherwise noted.