Sheep (シープ) is a humanoid ammonite in Wadanohara and the Great Blue Sea. They are one of the minor antagonists working for the Sea of Death.

Sheep's hair appears to be gray tentacles and it covers their right eye. Their eyes are red, slightly slanted and have large bags under them. On their head, they have a large spiral shell that's striped dark brown and light brown horizontally, and they wear a black-and-white striped shirt. The sleeves of their shirt completely cover their hands, and the stripes go across horizontally.

They appear to be quite nice and rather weak. They convey messages that indicate an infatuation with their co-worker, Old, as they respect him very much and hold him in high regard; this can be further seen in having the shark being the only thing listed under their likes in their bio found in the Bonus Room of Wadanohara and the Great Blue Sea. Not too much is known about them, but while they speak positively, they are shown to be rather sadistic and have expressed that they don't care what happens so long as someone is in writhing pain.

Not much is known about them, but they used to be one of the residents of Blue Sea before joining Mikotsuhime to the Sea of Death. Apparently, Sheep blames Meikai for "stealing" Old, further implying Sheep's acknowledgement with the shark being before the fall of Princess Mikotsuhime.

Old is one of Sheep's comrades in the Sea of Death. Artwork depicts Sheep having an infatuation for Old; this is further proven in Sheep's bio in the Bonus Room that has only Old under their listed Likes. They have an unrequited attraction to the shark and respects him.

Squid has been seen in artwork with Sheep; they are one of Sheep's associates in the Red Sea.

Princess Mikotsu is Sheep's princess; their relationship isn't seen that much in-game.

The two have never interacted or have been seen interacting in the past or in any artworks; however, upon encountering Sheep in-game, the conversation leads to accusing Meikai of "stealing" Old (their supposed love-interest). They have expressed disliking Meikai for this reason.

Sheep's dialogue portrait in Wadanohara and the Great Blue Sea.

The arrival of Sheep 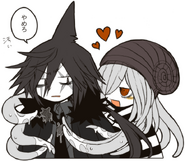 Retrieved from "https://okegom.fandom.com/wiki/Sheep?oldid=59843"
Community content is available under CC-BY-SA unless otherwise noted.