Sheena (シーナ) is a character that has yet to formally appear in any series. She is a panda girl.

Sheena has a pair of panda ears on top of her long white hair. She has teashades above her gray eyes. Around her neck is a small necklace. She wears a white shirt, a wide gray skirt with a gray bow on her left side, and wears black gloves. Also, beneath her skirt is what appears to be a petticoat. Finally, she wears black high heels over black stockings/leggings. 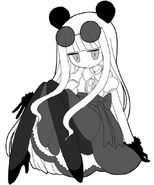 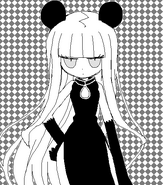 Retrieved from "https://okegom.fandom.com/wiki/Sheena?oldid=50775"
Community content is available under CC-BY-SA unless otherwise noted.