Setsudan (セツダン) is a character that has yet to formally appear in some of Deep-Sea Prisoner's series.

Setsudan has race-less white skin with red eyes and red hair braided into a single braid, tied together with a single black ribbon, She also has one horn that is half dark brown and half lighter brown with a black bow beneath it. She wears a brown mourning outfit with a black undershirt and a darker brown knee length skirt she also wears one gray legging and black boots; She has a lighter brown pillbox hat with a darker brown lining around the bottom and a brown bow near the front, a black laced veil is covering the left side of her face. Her left hand is skeletal as well as her right leg. Also, she carries a pair of large, black scissors. She probably has red bone wings as shown in a picture.

Up to this day, Setsudan has only appeared in some of Deep-Sea Prisoner´s illustrations. 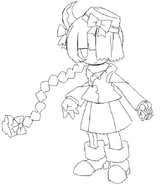 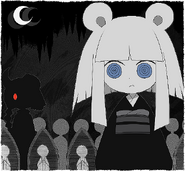 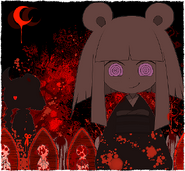 Retrieved from "https://okegom.fandom.com/wiki/Setsudan?oldid=50774"
Community content is available under CC-BY-SA unless otherwise noted.