Satsukugi (サツクギ) is one of the characters that has yet to officially appear in any series. She is friends with Shikabone and has a crush on him. She is a shinigami.

Satsukugi has dark yellow eyes and dark pink hair. However, her two long side bangs are light pink. Her demon horns are black and has rings and white buttons over it. She wears a black-white striped dress with a collar and a dark pink ribbon at her chest. She wears chains on her hands, black-white striped pants and black high heels with three white buttons at the heels. She wields a scythe on her right hand and a big nail-like accessory could be seen above her left hand.

Up to this day, Satsukugi has only appeared in some of Deep-Sea Prisoner´s illustrations.

She's shown to be friends with him, as well as harboring romantic feelings for him.

It's unknown what kind of relationship both of them have. 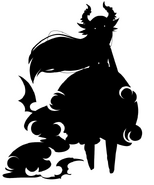 There are currently no known quotes from Satsukugi.

Retrieved from "https://okegom.fandom.com/wiki/Satsukugi?oldid=55537"
Community content is available under CC-BY-SA unless otherwise noted.