Sakatsuki (逆月) is a character that has yet to appear in anything. It's implied in the Sunahama logs that he is one of Minami's familiars.

Up to this day, Sakatsuki has only appeared in some of Deep-Sea Prisoner's Illustrations.

He may have some connection to Minami, due to having his symbol on his eyepatch and armband in the Sunahama log 2017 05 28. 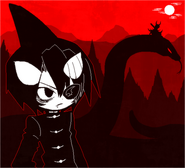 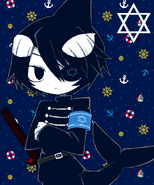 Retrieved from "https://okegom.fandom.com/wiki/Sakatsuki?oldid=51045"
Community content is available under CC-BY-SA unless otherwise noted.