Sabaki (捌木) is a character that has yet to formally appear in anything. She is a human girl and appears to go to the same school as Eruko.

Sabaki has fair skin, eyes with deep red irises and black pupils and dark gray hair with straight cut bangs that part on the left and that are tied into pigtails that curls that each end.

She wears a sailor fuku with a gray collar that has two white stripes along the edge, the fuku has a short black necktie that overlaps with a shorter edge and longer edge; the edges have a white hem, and a light gray piece in between the collar. The fuku is underneath a gray long-sleeved sweater, with a symbol on her left sleeve that resembles the end of her necktie on the shoulder of the sweater. She also wears a darker gray pleated skirt, black tights, and loafers that match the color of her skirt. She has been depicted holding a knife.

Not much is known about her other than that she may attend to the same school as Eruko.

Up to this point, Sabaki has only appeared in some of Deep-Sea Prisoner's ilustrations.

Hitomi is possibly one of Sabaki's classmates. 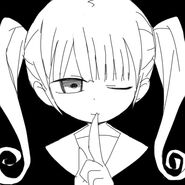 Retrieved from "https://okegom.fandom.com/wiki/Sabaki?oldid=50767"
Community content is available under CC-BY-SA unless otherwise noted.