Rosemary (ローズマリィ) is one of the characters that has been said to be part of the Obsolete Dream world. She is one of Fumus' angels.

Rosemary has reddish pink eyes and long white hair with two reddish pink streaks tied into low pigtails by two reddish pink bows with an "X" shaped same colored hair accessory on her left bangs. She wears a Japanese school girl uniform, which consists of a white shirt, a large reddish pink bow, a gray sweater, a darker gray pleated skirt, loose white socks and black loafers. Like most of the characters, her skin is raceless white.

She has feathered white angel wings and a soft yellow halo above her head.

Before her revamp, she wore a gray military outfit and black gloves. Aside from the clothing, her appearance remains the same.

Up to this day, Rosemary has only appeared in some of Deep-Sea Prisoner's Illustrations. 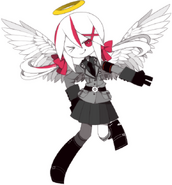 Rosemary's old portrait
Add a photo to this gallery

Retrieved from "https://okegom.fandom.com/wiki/Rosemary?oldid=50766"
Community content is available under CC-BY-SA unless otherwise noted.