Rosaliya Phantomrose (ロザリヤ・ファントムローズ) is a character that has yet to formally appear in anything. She is a devil and is Ver Million's former boss.

Rosaliya is one of the shorter devils at 160cm. It is unknown how much her horns add to this height. She appears to have long, waist-length, wavy pale pink hair with fringe bangs and magenta/orange eyes. Like most Mogeko characters, she has paperwhite raceless skin. Her horns are pink, large, and curved, and appear to have dark pink stripes wrapping around them. She has three pairs of pink wings that appear to alternate between a lighter shade and a darker shade of pink. Her dress appears to be extremely poofy, almost resembling a rose in full bloom. The main part of her dress is a dark pink, while the skirt is a lighter shade, and appears to have a white petticoat underneath. Her dress is adorned with roses that are the same color as her stockings. The collar of her dress is white and frilled with a bow tied around it. The ends of her sleeves are white. She appears to have a large ribbon on the back of her dress. She wears what appears to be pink heels with ribbons that wrap around her legs. She wears pale pink stockings.

Not much is known, other than that she is a 'good girl'. However, if one hurts her in any way, they are most likely doomed.

She's the devil of Flower World. Not much else is known, other than Liliya made her cry.

She hasn't appeared on any of DSP's work yet.

Liliya is the God of Rosaliya's world. He made her cry some time ago, causing all of his underlings to abandon him. 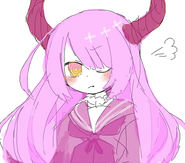 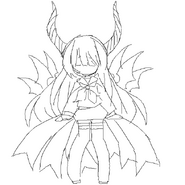 Devils
Add a photo to this gallery

There are currently no known quotes from Rosaliya.

Retrieved from "https://okegom.fandom.com/wiki/Rosaliya_Phantomrose?oldid=55815"
Community content is available under CC-BY-SA unless otherwise noted.