Rodise Neppie (ロディセ • ネピア) is a character that has yet to formally appear in any set world. He is a demon, though it is unknown who he works under.

Rodise has sharp black eyes and short black hair that covers his left eye. He wears a white dress shirt underneath a brown vest and a black pea coat, accompanied with a red ribbon at his collar. He wears black pants and black dress shoes with black gloves. He has gray demon wings, tail and horns. In his character art, he was seen holding a dark red gradient trident.

Rodise is said to be a boring normal demon.

Up to this day, Rodise has only appeared in some of Deep-Sea Prisoner's Illustrations.

The two of them can be seen in one of Deep Sea Prisoner's artworks. The two share romantic feelings. 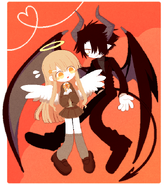 Retrieved from "https://okegom.fandom.com/wiki/Rodise_Neppie?oldid=53982"
Community content is available under CC-BY-SA unless otherwise noted.