Robust (ロバスト) is one of the characters that has yet to officially appear in any series. He is a jackal and seems to drink quite a lot.

Robust has medium-length messy blond hair, dark green eyes and raceless white skin. He wears a brown aviator hat with long rabbit-like ears. He also wears a light brown sweater over a high-necked white undershirt, black pants and a pair of black shoes. He has a furry brown tail and is always shown holding a bottle of alcohol.

His old character design features him with fair human skin instead. He wore a brown jacket, a white aviator scarf, and brown pants in which the ends were tucked inside his brown boots.

Robust is a heavy drinker. In his character portrait, he seems lethargic.

Up to this day, Robust has only appeared in some of Deep-Sea Prisoner's Illustrations.

It is unknown what kind of relationship they have. Both were seen in a picture together. 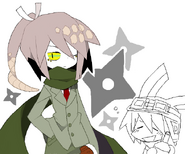 Retrieved from "https://okegom.fandom.com/wiki/Robust?oldid=41833"
Community content is available under CC-BY-SA unless otherwise noted.