Rimorimo (リモリモ) is a humanoid vampire squid and a supporting character in Wadanohara and the Great Blue Sea. She is part of Minero's friend group.

Rimorimo has slightly green tinted hair. The majority of her hair curls upwards, aside from the front sections, her bangs are straight cut. Her eyes are dark blue and empty looking.

She wears an off white colored shirt tucked into a red skirt and a darker red belt. The buckle of the belt is pink with four light red buttons. She also wears a pinkish red hooded cape, with light pink edges, designed to resemble a vampire squid. The hood of the cape has two points and the cape is tied around her neck with a dark red bow. Her stockings are brown and she also wears pinkish red heeled boots matching the color of her cape. The heel and lining around the bottom of the boots is a lighter pink shade, as is the accent on the side, which also has two dark red buttons.

Rimorimo seems to have a rather blunt personality, and always has a bored look on her face. She apparently hates noises, but she doesn't seem to mind Creamil and Minero's antics.

Minero is Rimorimo's friend and the leader of her friend group.

Rimorimo's dialogue portrait in Wadanohara and the Great Blue Sea. 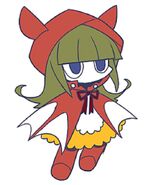 Retrieved from "https://okegom.fandom.com/wiki/Rimorimo?oldid=53978"
Community content is available under CC-BY-SA unless otherwise noted.