Rieta (リィタ) is one of the demons from the Flame World. She is one of the antagonists of The Gray Garden. She is a loyal underling of Ivlis.

Rieta has strawberry golden hair with messy bangs and a long side ponytail that is tied with a large ruby red ribbon, her ponytail ends in curls or a ringlet. She has rose red eyes and fair skin unlike most of Deep Sea Prisoner's characters. Rieta has abnormally large crimson claws. She wears a necklace that accessorizes a small orange sun with no center. She has pointed ears.

She adorns herself in a ruby red bralette that has peach linings, burgundy colored detached sleeves that have frilled endings and a small red bow at the top (area closer to shoulders), wearing as well maroon harem pants that also adorns the ends with a small red bow, a large red long split skirt that has two luminous orange suns separate of their spikes (that indicate their radiance) while the spikes are connected into a ring around the sphere of the sun, atop of the large wrap is a huge ruby red ribbon knotted into a bow, she also wears black flats.

A black sun, the same as the suns on the red wrap around her waist, tattooed on the left side of her torso, slightly curving to her side.

The lamp Rieta was turned into, by Reficul, is ruby red as well and has an orange sun, same as the suns on her torso and wrap around her waist, decorating it.

Rieta has shown time and time again that she's fiercely loyal to Ivlis and does everything to ensure that his orders are executed and that all is in 'order' for him, evidence of this is her hobby is simply "Helping Ivlis." This is seen more in the 9-14 Sunahama update, in which she is seen comforting a saddened Ivlis. Rieta is very competent and has shown this in her certainty in how a situation or battle will play out; examples of Rieta's competence is when she was advising that retreat was necessary when Etihw appeared, changing the stakes of the battle.

She is extraordinarily powerful, showing to be able to remove Ater and Arbus without trouble and taking down Grora just as easily, proceeding to even saying that it would "need a god" to take her down; furthermore the player cannot defeat Rieta in the first battle you have with her in the game.

Rieta appears to have a very cheerful attitude and is always, if not most of the time, smiling vibrantly in most situations; most of her works are always shown of her smiling.

Rieta has appeared in the short flash story, The Sun's Curse as a silhouette, this further implies that she has been acquainted with Ivlis long before the events of The Gray Garden, or even The Flame World itself. Rieta is also one of the females who Ivlis was aroused by in the past because she was a 'special being.'

Emalf is Rieta's fellow comrade. Rieta has saved Emalf once from Ater and Arbus when they pursued in taking him in as a prisoner, sending the twin demons out of The Flame World. Emalf appears to be afraid of upsetting Rieta, as seen when she assumes he's done his work and he lies to her (as Poemi makes clear in her thoughts, accusing Emalf of being a liar.) In one case, Rieta refers to him as an idiot.

Poemi is Rieta's fellow comrade. When Poemi asks Rieta if she can 'play' with Yosafire, Froze, Rawberry, and Macarona, Rieta first tells Poemi that it wasn't the time to 'play,' but Poemi persists and negotiates that she'll throw them into the prison and play later; Rieta agrees to the proposition. Rieta refers to her as an idiot, in one case, as well.

Ivlis is Rieta's boss. She is fiercely loyal to him and has shown to harbor possible romantic feelings for the devil; has also been considered a SUPER EXCEPTION towards Ivlis' homosexuality. Rieta displays determination towards making sure that everything is in order for Ivlis, and ensures his safety above all else, this is displayed when she bravely steps between Ivlis and Reficul and boldly states that she won't allow anyone to lay a finger on Ivlis (she's later turned into a lamp genie.)

In update 9-14 in Sunahama, Rieta is comforting Ivlis when he is upset and thinking about Siralos. Rieta shows that she cares deeply about the devil's well being, this is shown when she advises that they should retreat, later on encouraging Ivlis to cheer up. In log 2017年01月24日（火）, Rieta is seen crying behind a smiling Ivlis; the title of the log, "ただ、あなたの笑顔が見たかった" (I just wanted to see your smile) alludes to Rieta's desire is to see Ivlis smile and/or to see to his happiness.

In the now deleted update between 9-18 and 9-21, it is stated that Rieta and Ivlis rely on each other for emotional support, despite their moods. Rieta is also the only woman that Ivlis will recognize due to their exceptional relationship, especially due to the negative atmosphere created by other people. The reason why Ivlis lets himself be surrounded by a very small amount of girls around him is because he sees them as "priceless" due to the relationship that they have with Rieta.

Reficul turns Rieta into a lamp genie after she had attempted in protecting Ivlis from the Devil in The Gray Garden's True End.

Rieta is the penultimate boss of the The Gray Garden. Throughout the game, the player battles her twice. The first instance of battling her, however, is impossible to win as she won't take any damage. It immediately ends after a few turns. 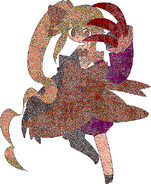 Retrieved from "https://okegom.fandom.com/wiki/Rieta?oldid=58529"
Community content is available under CC-BY-SA unless otherwise noted.