Reina (伶奈) is one of the supporting characters in Obsolete Dream. She is a fox Yōkai who often plays games such as othello with Bis.

Reina has peachy skin, a mask covering her face which is reminiscent of a fox's face, long white hair tied into a high ponytail, long red nails, and a long white tail. She wears traditional Japanese clothing, which consists of a dark pink kimono with the end of the sleeves having cherry blossoms and petals, a light pink nagajuban (kimono undergarment), a darker hakama with the left side having a plum branch with blossoms and pink clouds, white tabi (socks), and brown geta (footwear). She also carries a black folding fan.

Reina has a somewhat cynical personality. She is also always calm and collected. She is often seen teasing Bis about being bad in playing Othello, but she also cares about the welfare of others.

Kurotsuno is a friend and housemate of Reina. In contrast to her other housemates, Kurotsuno seems the least annoyed with her. They once briefly talked about dealing with negative memories, something which Kurotsuno did not run away from; this was notable because the latter usually avoids talking about such topics with others.

Bis is one of Reina's friends and housemates. They play othello together, even though Bis always loses. It seems Reina also likes to tease Bis sometimes, but they're on friendly terms nonetheless.

Met is one of Reina's friends and housemates.

They seemingly know each other.

It is unknown what relationship the two have; they were seen talking in a picture once.

Reina with the other Yōkai.

Reina and her leader. 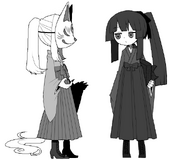 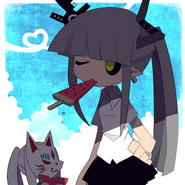 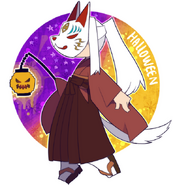 Retrieved from "https://okegom.fandom.com/wiki/Reina?oldid=59932"
Community content is available under CC-BY-SA unless otherwise noted.