Poemi (ポエミ) is a demon from the Flame World in The Gray Garden. She is one of Ivlis' children and one of the minor antagonists of the game.

Poemi has ridged horns, wings, and tail. Her tail and horns are red, and her wings are red on the outside and pinkish on the inside. Her eyes are reddish orange with a black pupil. She has light brown hair which is tied into two pigtails with red bows and red hands similar to most flame demons with white nails. Her outfit consists of a red and white dress with white cuffs with three golden buttons on the side,  a white sailor collar with the triangular neckpiece being light red and the ribbon being red, a black belt with a golden buckle, white stockings/leggings/socks(?), and red shoes with one red bow on the side of each shoe. However, in her in-game appearance, her shoes were black and didn't have any bows. She also lacked the three buttons on her cuffs in her in-game appearance.

Poemi's childishness clashes disturbingly with her psychopathic tendencies. She likes “playing” with “toys” (brutally torturing, killing, and eating people). Her bio states that she loves her father and hates the sea.

Poemi was possibly born from flame and has followed Ivlis and helped him with his "work."

Ivlis is Poemi's father. She loves him and helps him with his "work", which consists of killing the inhabitants of the world they are invading.

Rieta is Poemi's fellow comrade. They seem to talk about many things.

Adauchi is Poemi's brother. She loves him and their relationship is pretty good.

Licorice is her half-brother. They are seemingly on good terms with each other.

Poemi appears as one of the bosses in The Gray Garden. Throughout the game, the player battles her twice. 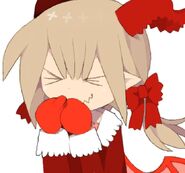 Retrieved from "https://okegom.fandom.com/wiki/Poemi?oldid=51265"
Community content is available under CC-BY-SA unless otherwise noted.