Petit (プティ) is a character that has yet to formally appear in any series. She is some sort of bug, most likely a cockroach.

Petit has white race-less skin, short, brown, wavy hair with two long antennas sticking out of her head and pitched black eyes. She wears a black dress over a white under shirt with buttons,she also seems to have brown tailcoat; she has a white petticoat and wears a brown ribbon around her neck. Also she wears heeled, Mary-Jane shoes and brown stockings. Her nails are painted black.

Up to this day, Petit has only appeared in some of Deep-Sea Prisoner's illustrations. 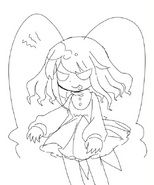 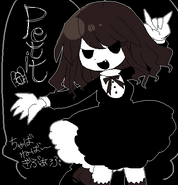 Retrieved from "https://okegom.fandom.com/wiki/Petit?oldid=50747"
Community content is available under CC-BY-SA unless otherwise noted.