Nio (ニオ) is one of the characters from the Obsolete Dream world. She is a nekomata, which is a kind of Yōkai.

Nio has short brown hair that is parted at the side with cat ears. Her eyes are yellow and her sclera is reddish orange. Her eyebrows are round and short, and she has two brown tails, one being darker and one being lighter. She wears somewhat of a tight black suit with a bell at the collar with black dress shoes. Her reddish orange nails are long and sharp. In her official character art, she is seen holding a fish in her hands.

Not much is know about her personality, but she seems to be rather cheerful and playful.

Up to this day, Nio has only appeared in some of Deep-Sea Prisoner's Illustrations, 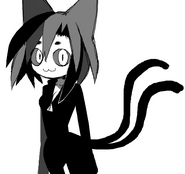 There are currently no known quotes by Nio.

Retrieved from "https://okegom.fandom.com/wiki/Nio?oldid=59926"
Community content is available under CC-BY-SA unless otherwise noted.