Nekoyama's appearance is that of an ordinary seagull. He wears a green cap with a gold button on top of his head. He also carries a green satchel for to store his deliveries.

Nekoyama is a quirky seagull who loves to tease Samekichi. He's a bit melodramatic, considering the time he was acting like he was dying, and the only thing to make him better would be a Star Fruit. He is also slightly romantic. When Samekichi asked for his help about Wadanohara, he very much enjoyed listening to Samekichi talk about her, reminiscing about his old romance.

Wadanohara is one of Nekoyama's friends. Wadanohara and her familiars helped him when he fainted on Star Isle.

Memoca dislikes that he asked Wadanohara to collect star fruits in the Star isle, calling him "lazy".

Nekoyama with Memoca and Minami.

Nekoyama delivering the ocarina to Wadanohara. 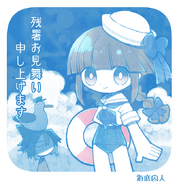 Retrieved from "https://okegom.fandom.com/wiki/Nekoyama?oldid=58607"
Community content is available under CC-BY-SA unless otherwise noted.