Mors (モルズ) is a character that has yet to formally appear in anything. He is a demon and Reficul and Sin's son.

Mors wears a simple black and white suit with black shoes to complement them. On his head he wears a headpiece, which appears to be a bleached skeletal hand.

His horns are a dark gray, with each horn having six indents in them. His hands appear to not have flesh covering them, leaving them skeletal. He also carries a gold pocket watch in his left hand, which is seen to be pointing at 4:00.

He is usually seen slouching. He has a shaggy blonde hairstyle that reaches up to his neck and long bangs that cover his right eye. Deep Sea Prisoner had described his vermilion eyes to be like that of a "dead fish's".

Mors is apathetic and silent, befitting his character design.

Up to this day, Mors has only appeared in some of Deep-Sea Prisoner's Illustrations.

Reficul is Mors' mother, but he calls her "Maou Sama"(魔王さま), or Lord Devil instead due to having two mothers.

Sin is Mors' mother; unlike his other mother, he calls Sin his mother instead of using another name. Deep-Sea Prisoner has said they are very close.

Mors discreetly bullies him. Though it was never stated why, it can be assumed that it was because of how Lzet and Reficul are lovers.

Not much is known about them other than that they seem to be friends as seen in one of Deep Sea Prisoner's artwork.

In the background
Add a photo to this gallery 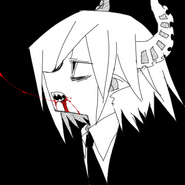 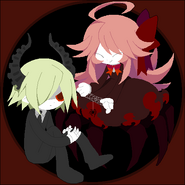 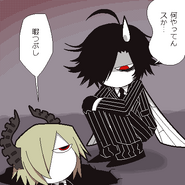 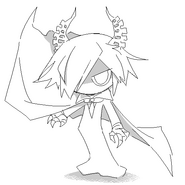 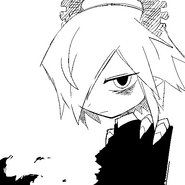 Retrieved from "https://okegom.fandom.com/wiki/Mors?oldid=51047"
Community content is available under CC-BY-SA unless otherwise noted.