Mogekov Hashasky ( モゲコフ・ハスハスキー) is the ruler of the Hashasky. He will soon star in the General Hashasky's Great Adventure, as one of the main playable protagonists (alongside Moge-kov). He seems to be analogous to King mogeko as they both rule their respective kingdoms.

Mogekov closely resembles a Mogeko, but has some notable differences. He has white fur rather than yellow, a brown mouse tail rather than black, and unlike most Mogekos or Hashaskys, he wears clothing.

He wears a dark blue ushanka emblazoned with a yellow Mogeko head and a dark blue furry scarf.

He's fond of frozen yogurt and tends to cry easily, but will deny that he's crying. He also seems to be fond of alcohol and can hold his liquor.

Originating from his Russian homeland Mogeko Kremlin, Mogekov is the ruler of the Hashasky. At some point before the events of Mogeko Castle, he was kidnapped by Moge-ko, and brought to the castle as captive.

Mogekov will be the main character of the upcoming game.

Mogekov can be found in a room on the fourth floor of Mogeko Castle, alone, wailing about how he wants to go home.

Seen in the trailer of General Hashasky's Great Adventure, Moge-ko kidnapped Mogekov and brought him to Mogeko Castle to be held as captive. Given their relationship as abductor and abductee, the two are enemies. 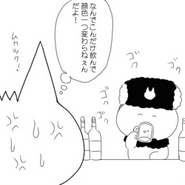 Mogeko: How the hell can he drink like this without even getting the slightest bit red! It pisses me off! 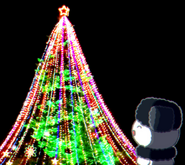 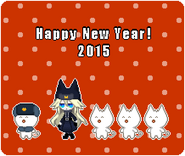 Retrieved from "https://okegom.fandom.com/wiki/Mogekov_Hashasky?oldid=59430"
Community content is available under CC-BY-SA unless otherwise noted.