Mitsuki (ミツキ) is a minor character in Poison Bugs. She is Scor's girlfriend and often tries to cook for him. Unfortunately, she is horrible at cooking.

Mitsuki is a cheerful bee girl who has blonde hair with brown tips, and dark brown eyes with curling eyelashes. She sports a pair of black antennae on her head, a pair of clear insect wings, as well as an extra pair of arms. Also, she has a yellow and black striped stinger.

She wears a brown striped bow in her hair, and one on her shirt. In addition to this, she wears a brown jacket with cream fur trim, and a frilly brown skirt, complete with crumpled boots.

Mitsuki is said to be a tough yet cheerful and kind girl. But, despite this, she is unfortunately a horrible cook and makes Scor eat her cooking.

It is unknown what relationship the two of them have. 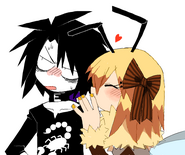 There are currently no known quotes from Mitsuki.

Retrieved from "https://okegom.fandom.com/wiki/Mitsuki?oldid=57880"
Community content is available under CC-BY-SA unless otherwise noted.